Jill Nicholls is a retired public health dietitian, and consultant.

“My work has been on the coal face of public health, delivering for the Taranaki community. I first got interested in public health when I volunteered for a heart week activity for the Nutrition Association, when we took people’s blood pressure and BMI. I thought I’d love a job like this, this is where it’s at; not waiting for people to end up in hospital, but being proactive and talking to people when they’re well. 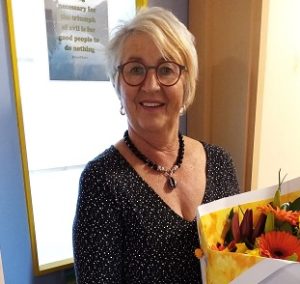 I did the University of Otago post graduate diploma in community nutrition, beginning in the first year it was offered. I was one of the first people to work in community nutrition, from 1990; the Ottawa Charter was only written a few years prior. We really did health education; I thought if people knew how much sugar was in fizzy drinks, they wouldn’t go near them! But I came to realise that people’s knowledge is one thing but changing their behavior is something else and the environment is so influential on people’s choices.

Most of my career has been as a public health advisor with Taranaki District Health Board. I’ve worked in public health for over 30 years, it’s a long game, a long, slow process. I am frustrated by the lack of leadership from government, for example for sugar and fat taxes.

Public health has experienced changing priorities; there were wonderful years with Healthy Eating, Healthy Action (HEHA) when we saw lots of traction. Suddenly the government changed and there wasn’t any focus on nutrition, and I worked on Smokefree and alcohol campaigns for a while. As a country we have seen so many supporting factors to encourage smoke free environments, I wish the same could happen for food environments.

To stay positive our team celebrated the small gains. We worked with some of the big corporations, for example with Fonterra tanker drivers who were doing shift work and not eating well. We ran education classes and did weekly food plans for the drivers on swing shifts. I met up with a tanker driver years later, he said he still was using the plans.

Taranaki’s Bell Block community established a fizz-free coalition, to support a Taranaki District Health Board initiative called ‘Tap into Water’. The Puketapu school principal said, ‘the issue is there’s a dairy across the road and the kids buy fizzy drinks on the way to school’. So I asked the dairy owner not to sell to kids on the way to school as it would affect kids’ learning. Then that dairy owner said, ‘What about kids on the bus who buy drinks at the dairy by the bus stop? Can’t we all do it?’ So together we agreed to make the whole of Bell Block fizz-free before school, one dairy at a time. This was a combined effort and many people were involved in creating this supportive environment for the children. You can read more about this initiative here.

To work in public health, you have to be really patient, but you also need short term, measurable goals. Be planned but open to opportunities and be ready to pivot at short notice.

I was lucky in my career as I got into public health in its infancy. Those of us who were pioneers in community nutrition felt we could make a difference, as no-one had done it before. The approach to public health has changed a lot  from health education to now looking at systems change, and I admire people like Boyd Swinburn who has kept his passion for public health nutrition.

I’m not one to shy away from being critical and if I see something that shouldn’t be happening, I’ll speak out. Years ago, I wrote a letter to the Ministry of Justice about periodic detention workers who were getting pies twice a day on the job. I wrote saying it wasn’t in-line with public health policy. That letter got aired on TV current affairs programme, and I was censured by my employer, but I felt it was my job to promote public health nutrition. I’m encouraged to see healthy food options more readily available.

I plan an active retirement; I’ll get an e-bike and do lots of trails. I’ll continue to do my consultancy work in rest homes to ensure our aging population obtains adequate nutrition and I’ll keep an interest in public health issues.”