Corrianne Simpson is a retired social worker, best known in public health for her work as a health promotion training coordinator at the Cancer Society.

I always knew that I wanted to work with people and to make a difference. I trained in social work and family therapy, helping people shift the roadblocks in their lives, while being very aware that for some people their personal issues are embedded in much bigger societal issues.

I had done that since the mid-1970s, and had the experience of working with UNHCR in Thailand with unaccompanied refugee migrants that had fled from Cambodia. There, I learned first-hand what the concept of freedom was and how privileged we are in New Zealand. 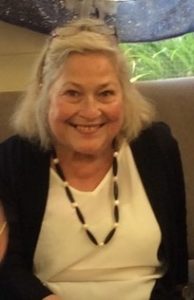 My two sons were nine and 12 at the time – I’d come home from work and they’d say ‘Mum, Dad says we can only watch one video tonight’. I’d say, ‘well, do you know what I’ve seen today?’. I did that job for three years and then we came back to New Zealand in 1981.

I wanted to get back into therapeutic training, but I wanted to be part-time so I could be around for my children. That wasn’t very fashionable at the time. Eventually I started working in the Child, Family and Adolescent Health Service. I went up the ladder there, as you do, but being a therapist and being a manager are entirely different skill sets and after a while I just didn’t want to do it any more.

I was offered a part-time job at the Cancer Society as the national breast cancer support service coordinator, which I did for five years. One of the people I worked with at the Cancer Society was Kawshi Di Silva, a very inspiring person who works at the boundaries of things. One day she asked me if I knew anything about motivational interviewing. I’m ashamed to say I told her that it sounded like chat show rubbish, and that I wasn’t that sort of person. She gave me a book on it and asked me if I’d like to consider teaching it. I really didn’t think she was serious, but then I read the book and it resounded with a whole lot of clinical concepts and perspectives – the concept of empathy, accepting people as they are. I was completely blown away by it. I had done some teaching of family therapy before, so I thought, ‘yeah, I can do that’. Then she said, ‘by the way, you have to do smoking cessation as well’.

Motivational interviewing is about forming a relationship or a partnership with the person, so you’re not ‘in charge’. It’s not judgemental. It’s about looking at what would happen if they continued with this behaviour, asking them ‘what do you think things will be like for you in five years’ time if you keep doing this?’. You’re gently exploring their perspective on what their behaviour means to them and looking for a kernel of change.

I went on a number of courses and ended up writing a project with the School of General Practice at Otago University, looking at how private practice GPs were in the perfect position to make quick but important health promotion messages about smoking. We ran a full day course on motivational interviewing, first with GPs and nurses, then with dentists and hygienists, optometrists and opticians. So many people would say, ‘I do smoke, but I’ll give up at some point’, or ‘my grandfather smoked 20 a day for 30 years and he was fine’.

We’d done a lot of promotion at that point about the damage of smoking. It’s a bit like obesity – you’re fighting big corporations and they’ve got a lot of dosh. Other people heard about the courses and they were found to be really effective. I did them in the Wellington divisional area first, then the Cancer Society went on offering the programme to public health practitioners. I found that job so rewarding and exciting. I was in one of the centres in Marlborough and an older nurse came up to me at a subsequent course and said, ‘I didn’t think that I could learn anything at this stage in my career that could improve or change how I connect with patients, but this has given me a new lease of life’.

Until people trust you, they’re not interested in your health rhetoric. People have to be familiar with you, so we need to be tuned in to that, especially with Maori and Pacific people. You have to make the human connection, even though it might be slower in the beginning. Showing a little bit of kindness can make all the difference with how people connect with you. I’ve heard that from people talking about their doctors – if they feel that the doctor cares about them, they’re more likely to listen to what they say.