Posted at 11:36h in Healthy Environments by Alison Pask

Healthy Families Waitakere has been working alongside 32 schools in West Auckland to implement water only policies and strengthen messaging around water within school environments.

With the support of principals, teachers and board members, students have been driving water related changes in their schools. This has resulted in the installation of 61 new fountains and all 32 schools taking a much stronger stance on being pro water.

The students identified opportunities to increase the consumption of water by their peers and explored ideas around the placement and design of new fountains to strengthen their messaging about the health benefits of drinking water.

‘Driving the changes, students mapped locations for these fountains, based on insights gathered on where they play and the highest use areas.  Many older fountains were placed in areas which weren’t necessary high traffic areas for the children – and naturally the students were less likely to want to use them,’ adds Kerry.

Kelston Boys High School was one of the foundation schools leading the way.

‘We worked alongside Kelston Boys High School in 2017. The school community was wanting to make sustainable changes to tackle sugary drink intake among students.  This was the start of something exciting and now over 20,000 students from other schools have made the change, with many more to follow,’ says Kerry.

Massey Primary students took great pride in designing their new water fountain and Principal Bruce Barnes says the new fountain has been part of a much wider water-only policy that has been well embraced by the school community.

‘Last year 25 students took part in a pro water project alongside Healthy Families Waitakere, looking at what a water policy would look like.  The policy has since shaped a number of initiatives, including students identifying the best location for the new fountain,’ says Bruce.

The water policy has brought about real changes in the school environment.

‘We allow students to freely leave class to drink water from nearby fountains, and we’ve seen an associated improvement in learning.  Teachers have also seen noticeable changes in lunch boxes since implementing the water only policy,” Bruce adds.  “100% of students who used to bring sugary drinks to school are now opting for their water bottle that can be refilled throughout the day.’

When a new fountain was installed at Te Kura Kaupapa Maori o Hoani Waititi Marae, Auckland’s largest pan tribal urban Marae, students put their own spin on the water only challenge in schools by extending a wero (challenge) through the form of a haka.

Hoani student Tuake Pohatu-Ryder led his fellow students in a haka that highlighted the kura’s commitment to drinking wai, which they performed to whanau and community as a wero for Maori to do the same – with the purpose of promoting the importance of making their kura ‘pro water’.

The Hoani Waititi Board of Trustees acknowledged that the water fountain was well used by the students and moved to fund a further two fountains to make water more accessible to whanau and students of the kura.

As part of West Auckland’s pro water movement, a number of school principals are joining others in signing the Healthy Families Waitakere water pledge, a social movement to creative more health promoting environments where water is the first and best choice for all.

School leaders have joined other West Auckland representatives including local politicians, councillors ad community and primary healthcare organisations.  By signing the pledge, each person and organisation has committed to take action, drink more water and encourage others to do the same. 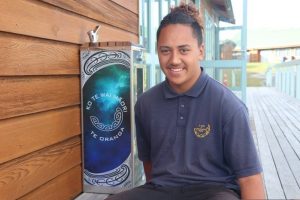 Hoani Waititi students personalised their water fountains with a Māori influenced design that incorporates the journey on which they are embarking to create a healthier sustainable environment. 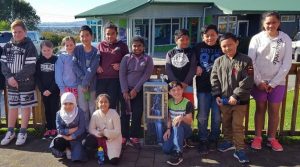 Massey Primary students contributed to the placement of the water fountains around their school.

Article provided by Healthy Families Waitakere and Sport Waitakere, May 2018