Posted at 15:43h in Healthy Community by Alison Pask 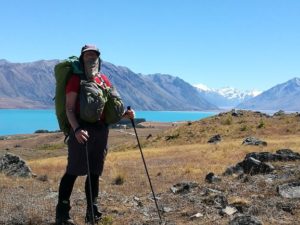 However, on the way Celia found many lessons. Some were about personal perseverance and achievement, pleasure and pain. Some were lessons to share with Councils, DoC and NZTA about how infrastructure could be improved. Some were about the power of an extreme event to motivate daily activity and some were insights about the economic effect of a new connection. Some were simply about food, glorious food!

Celia shares her motivation for doing the walk, her preparation, getting underway, how she enjoyed achievements and her long-term health outcomes.

I remember the end of our first day on Te Araroa, having walked north from Bluff. I lay on the motel bed in Invercargill with aching hips, blisters and a sunburnt nose thinking “So that’s 34km down, 2966km to go. What have we taken on?”

When I announced I was not going to contest the Wellington Mayoralty for a third term, having found a good successor, I knew people would be interested in what I was going to do next. I also knew that after six years of each day being carved into half-hour fragments, with little time for family I wanted to unwind.

I wanted to spend significant time with my husband who had been so supportive as my campaign manager, my unstinting escort to community, arts and sports events, my essential early morning coffee-maker, my co-celebrant of political success and dear consolation after some bitter political spills. We both enjoyed tramping so I suggested we walk the iconic New Zealand trail, Te Araroa. He said “It would take a lot of organisation.” Which I took as a “yes”.

We’d been occasional trampers and done a couple of multi-day tramps. I went out on Wednesday tramps with Tararua Tramping Club to reclaim my body from Mayoral breakfasts, morning teas, black-tie dinners, community New Year events (in Wellington there are SO many New Years, from Matariki and Hogmanay to Iranian Norooz and South Indian Samvatsarādi). All of them seem to have significant ceremonial feasting as well as dance or music. 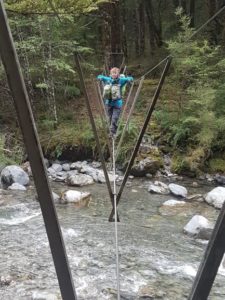 Over six years as Mayor and fourteen as a Councillor, I always enjoyed participating in community events but they had played havoc with my waistline and my doctor had begun to mutter about cholesterol. Between 2009 and 2016 I’d put on 8Kg and it wasn’t muscle. I thought I’d kept quite fit, cycling to work most days as well as meeting Hillary Clinton on my bike (smartly dressed with the bike parked out of the way and not a speck of Lycra of course). I’d also kept up my kayaking and crossed the Cook Strait twice, admittedly in a double.

Due to Alastair’s work commitments and a bit of pre-training required, we couldn’t start till after Christmas so, to avoid bad weather, we decided to do the South Island first, from Bluff to Ship’s Cove. My mother-in-law, a sprightly 84-year-old, drove our support vehicle for the first month – meeting us where the trail connected with the road and bringing our pre-prepared food supplies plus some fresh delights, saving us time shopping that could be spent walking – or lying down!

We’d invested in a really light tent, carbon fibre walking poles and new lightweight backpacks as well as our usual jackets, sleeping bags, water bladders and first aid kit. It’s a serious endeavour where you’re out of cellular network reach a lot of the time so we took a SPOT GPS-locator in case of emergencies, and for friends to track where we were. We also loaded up Te Araroa’s latest maps and notes onto an app on our phones, which shortened a few inevitable “go left, no, go right” debates.

Physically the first ten days were the hardest but the excitement of reaching each destination was hugely motivating. I loved being in forests full of lichens and mosses, mistletoe flowers and native orchids. Birdlife varied from silence to a glorious bellbird cacophony in Nelson Lakes.

I even saw a stoat near Mavora Lakes. The biodiversity connection with effective trapping and poisoning of mustelids and rats or laissez-faire approaches was pretty clear. We felt strong evidence of the positive mental health effects of daily connection with biodiversity, aka the biophilic effect. The grand scale of South Island mountain landscapes made human steps seem very small.

I didn’t find myself thinking deep and original thoughts – though I walked away from re-enacting political battles and “what could have been”. Often the deepest thoughts were “My little toe hurts, shall I stop and put on a blister plaster now?” or “Can we really get to the hut tonight or shall we pitch the tent in the rain?”

After a couple of weeks, when we had begun to lose fat and put on muscle, I occupied several kilometres a day making up imaginary menus. In reality we settled on a standard breakfast of muesli, dried milk and coffee, morning tea of scroggin, lunch of wraps and some fresh fruit, protein of eggs or fish or hummus then a three course dinner. Dinner was usually packet soup, an Indian pre-packaged meal like Dhal Makani or Paneer Muttar with pre-cooked (NOT dehydrated) brown rice, followed by dessert.

Quite disgusting instant strawberry dessert made with dry milk tastes FANTASTIC after 30km in the rain. Foraging yielded some interesting seasonal fresh food including puffballs, field mushrooms, red gooseberries, feijoas and grapefruit. When we arrived in towns, we devoured salads, milkshakes, fresh fruit and hot chips! Who knew that Ngaruawahia has one of the best Indian restaurants in New Zealand?

There were certainly some tough bits – often after lunch it was hard to get going again. Walking along roads was the hardest – I remember counting the power poles and thinking I can walk for ten more, then have a rest. About 3pm one day we had come to a nice campsite at the foot of Mt Pirongia and I thought it would be fine to pitch our tiny tent there but the ‘other half’ said we could make the hut at the summit. 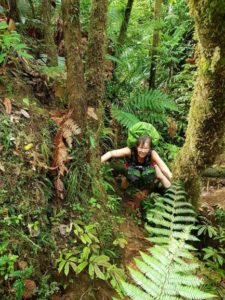 There was such deep mud that we only got to the hut, in the dark and the rain, at 9pm. We slept well that night. In fact I slept well pretty much every night. I needed anti-inflammatories for my hips and knees but other than that we were fine. Often, we were asleep well before it was dark.

I needed ten hours a night when we were walking long days. The nights were full of vivid dreams – probably contributing effectively to my political de-tox. I’m not very brave about heights and found some of the sidles above rivers pretty scary. Over time I got a lot braver, partly because I developed a little mantra “This is a technical issue, not an emotional issue. It’s about where I put my foot next, not about the drop to the river.”

Crossing rivers didn’t worry me and heights didn’t worry my husband so we were a good team. He was a faster walker on hilly sections (even carrying the tent and the dinner) so for some stretches we went at our own pace. On the flat we were more companionable. If he ever said, “You might not like the next bit,” I knew there would be a horrid drop to sneak around!

The most enjoyable parts were views from the tops, swimming in rivers ‘au naturel’ and the sense of daily achievement. Dogged perseverance meant actually getting to your destination whereas political success can result from a fortunate coincidence or months of hard work can evaporate due to a colleague’s intransigence or perfectionist attitude that “it’s just not good enough, so we shouldn’t do anything” or central government’s different priorities or even negative media.

The only thing that slowed us down was a really big storm. We certainly didn’t wait for fine days and you get used to putting on wet tramping gear in the morning.

I’d ditched the jandals as hut shoes after getting a splinter in my toe and finding them very slippery when going out to a DoC long-drop in the middle of the night. My second luxury, or essential in my book, was a lightweight filter so I could have coffee for breakfast and morning tea.

Rest days were fun – after eating lots and getting the laundry done, we usually found ourselves WALKING around – the Hamilton Gardens, to the Waitomo Caves, to the beach at Peach Cove. It was relaxing to walk unencumbered by our packs, just strolling along rather than aiming for many kilometres! 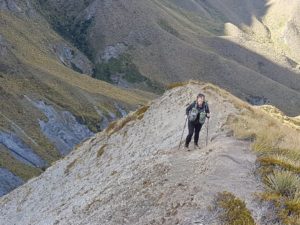 After walking the South Island northwards, we walked the North Island southwards. The rivers, kauri forest, beaches and marae were marvellous. I heard my first wild kiwi at Whangarei Heads. Rather than take the busy Tongariro crossing route, which we had walked before, we opted to canoe all the way from Taumaranui to Whanganui City, in six days.

We didn’t walk every road section – we hired bikes from Whanganui to Palmerston North, a section that local Mayors, the Te Araroa Trust, the Walking Access Commission and NZTA are trying to solve with local landowners.

Te Araroa goes through several cities – Auckland, Hamilton, Palmerston North, Wellington and Invercargill, as well as a number of smaller centres such as Kerikeri, Rangiriri, Waikanae, St Arnaud, Wanaka and Bluff. We really enjoyed the quirky details of places and the opportunities to see urban landscapes from a different viewpoint.

Often our packs and poles would draw attention from locals out for a walk and they were much amused when they asked, “What are you training for?” and we replied, “We’re not training, we’re doing Te Araroa.” Even with signage, many residents don’t know they are right by our national trail. Through the cities there are charming walkways that gave a greener perspective on places we thought we knew well. 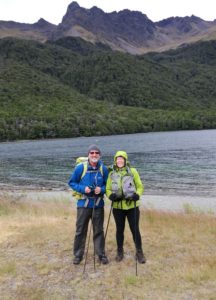 With Alaistair in Southland

As we walked back into the capital, and then our home suburb of Island Bay, where the trail was officially opened by Sir Jerry Mateparae with Geoff Chapple and the Mayors of Northland, Invercargill and Wellington in 2011, I confirmed that “Let’s walk Te Araroa after I’ve stopped being Mayor!” was a great idea.

It took us five months in total and two pairs of boots. A year later, I’ve ‘rounded out’ a little but I’m the same weight I was a year before I became Mayor. An interesting health side-effect is that my gums are in much better health. I’ve also been motivated to walk more since, both in New Zealand and overseas. I walk distances in towns that previously I would have biked, bussed or driven.

I’m delighted to inspire people to be active. Many people have said “If you can do it, so can I!” and they’re right. I’m no great athlete but with preparation, good gear, supportive friends or family, everyone can do sections of our marvellous national trail, the iconic Te Araroa or set a bucket list goal to do the whole thing.

Celia Wade-Brown was Mayor of Wellington from 2010 to 2016. She is now a trustee of Te Araroa Trail Trust, National Secretary of Living Streets Aotearoa and an Advisory Board member of the Biophilic Cities Network.