Jasmin Jackson, nutrition advisor for the Heart Foundation based in Rotorua, shares her enthusiasm for improving both learning and health outcomes for children in Rotorua.

The Heart Foundation has been supporting schools to improve their canteens and tuckshops across the country for many years. Jasmin has observed that although schools wanted to be able to provide healthy lunch options to their students, there were many barriers to overcome.

“It’s easier to heat 50 pies than make 50 sandwiches. Finding parents or teachers to run a tuck shop with healthy food is a s

truggle for all the schools I’ve worked with,” says Jasmin.

Through the lack of nutritious options in schools, an opportunity was identified to improve access to healthier food for school children using an existing approach, Ka Pai Kai, from the Waikato District Health Board and Tokoroa community.

The Heart Foundation in collaboration with Healthy Families Rotorua began a partnership that would see the adaption of the Ka Pai Kai initiative for the Rotorua community, and eventually the establishment of Ka Pai Kai Rotorua Charitable Trust.

Jasmin has a four-year-old son starting school this year. She wants her son to be part of an education environment where all children have access to nourishing food.

Several surveys were conducted with different community groups such as teachers, parents and local kaumatua. Their feedback indicated that cost and convenience were important to parents. A lack of capability in schools affected whether they were able to offer healthy options and local kaumatua indicated that for sustainable change to occur, it was imperative that the focus needed to be on tamariki.

Ka Pai Kai Rotorua was established as a Charitable Trust to permit access to community grants as a source of additional funds and a way to ensure costs are minimised.

Volunteers are also critical to the success of the initiative, as they are involved with the daily preparation as well as the delivery of the food. Minimal overheads allow Ka Pai Kai Rotorua to maintain the affordability factor. When the Rotorua community first heard about this initiative, offers of support flooded in, creating unexpected issues for Ka Pai Kai Rotorua around process.

“Creating a fun environment, showing appreciation, and matching skills to roles has ensured the retention of volunteers. One of the highlights for the volunteers is going to the school to see the happy recipients of the lunches,” Jasmin says.

Creating mutually beneficial outcomes has been important. During the pilot period, several local  Māori businesses started providing donations which subsidised the cost of the lunches, making them even more accessible. 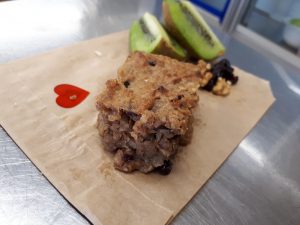 So far, four schools have been fortunate to be paired with four local Māori businesses who support them through donations. Each business supports their nominated school in different ways, that is individualised to each school. The response from schools has been very encouraging, with school staff feeding back that they have seen improvements in behaviour and even school attendance, thanks to Ka Pai Kai Rotorua lunches.

An environmental scan that was conducted prior to the pilot showed that some of the pilot schools had the most exposure to unhealthy foods in their immediate environment.

Evaluations show keeping the low cost is making a big impact on the number of families now ordering school lunches; in some school’s lunch orders have tripled since the subsidy started.

Ka Pai Kai Rotorua wants the food to be valued and does not want to replicate the great work of Kids Can (who provide free food for children who come with none), hence the choice not to give away free lunches but create a subsidy, a win/win situation.

Jasmin believes success lies with the key relationships and partnerships that have been established with supporting organisations. There is a strong commitment of trust and a mutual desire to make a difference from all partners.

To celebrate the success of the pilot, the plan is to gather all stakeholders together in Term 4, to reflect on the past term and launch into the future. The summer menu will be introduced, and more schools will be able to access Ka Pai Kai Rotorua lunches.

Jasmin at the Heart Foundation: [email protected] or