Posted at 12:37h in Healthy Environments by Alison Pask

I met Lucy Godfrey at the 2 Walk and Cycle conference in Palmerston North in July 2018.  Lucy works for Mott MacDonald in Auckland as a Senior Transport Planner and she previously worked in the UK for Transport for London.  I was inspired by her work in London, project managing the creation of high-quality public streets including suitable areas for people to cycle connecting public transport from the river to the many facilities along the Blackfriars Mile. 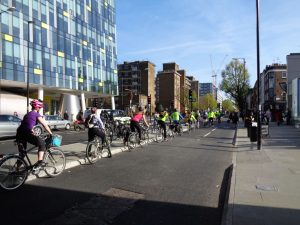 Blackfriars is a district in central London, located to the south of the River Thames, close to the Southbank and St. Paul’s Cathedral.  Lucy’s role was to oversee the planning, consultation and delivery of the North-South Cycle Superhighway, a segregated cycle route from Elephant & Castle, through Blackfriars, over the River Thames at Blackfriars Bridge and through the City of London to King’s Cross.  This route was part of a wider programme of cycle infrastructure as part of the Mayor’s Cycling Vision for London.

There were numerous stakeholders and community members who had an interest in the cycle route and many saw it as an opportunity to gain wider improvements for Blackfriars and make it a more attractive place and destination for people to live, work and play.

There was a clear demand from residents and the local authority to make the streets a happy place where people wanted to linger. In a collaborative effort, Lucy worked with developers along Blackfriars Road who had sites they were redeveloping.  They pooled resources and funding to deliver much more than was initially planned. This included the addition of park benches for people to sit on, high-quality footway paving which removed trip hazards, rubbish bins and trees to beautify the street environment, resulting in a healthier street. 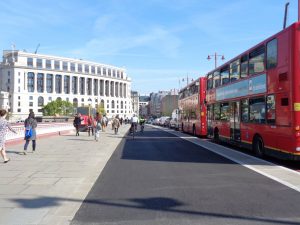 Lucy and her team also developed an intensive engagement approach, knocking on the doors of every business along the route to understand their concerns and gain information on their servicing and delivery arrangements.  This enabled them to make changes to the design such as relocating loading bays to help facilitate their business operations. 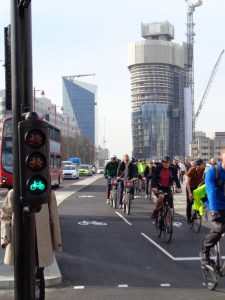 Another engagement approach involved the brewery industry.  There were 11 pubs along the route and the brewery industry (and the project team!) were concerned about how the beer kegs could continue to be safely delivered.  Lucy’s team worked directly with the brewery companies and observed how they currently made deliveries.  This was insightful in understanding how heavy and immobile the kegs were, even when empty.  Changes were made to the design of the cycle route by introducing additional dropped kerbs to make it easier to roll them across the cycle lane to the pub and reinforcing the footway so that it wouldn’t crack when the beer kegs were dropped onto them.   Lucy’s team also worked with the delivery companies on their delivery scheduling to avoid busy times where there would be lots of cyclists in the cycle lane, thus reducing health and safety risks.  They also developed bespoke signage which could be used to warn approaching cyclists and pedestrians that a delivery was taking place.

Great outcomes were also achieved for people who were visually impaired, a group previously not considered enough in the design of cycleways, particularly in relation to bus stops. Lucy set up a working group with accessibility groups and worked through the design of the new bus stops (Bus Stop Bypasses) as there were concerns on how visually impaired people would be able to safely cross the cycle lane to access them.  A zebra crossing was trialled at the bus stops and this resulted in a change in the design standards for Bus Stop Bypasses which now need to have a zebra crossing across the cycle route to ensure they are fully accessible.

During public consultation, which lasted for 10 weeks, Lucy and her team attended over 50 meetings, presenting to a wide range of stakeholders including campaign groups, residents, councillors, business owners, accessibility groups and the taxi trade association.  The engagement Lucy had already undertaken helped with these conversations as she was already aware of issues which had been raised.  She was able to explain the wider benefits of the scheme in improving the street environment and creating a safe cycle route which would encourage many more people to try cycling, both young and old.

There were over 11,000 submissions during public consultation on this one cycle route and an 86% support for the scheme. 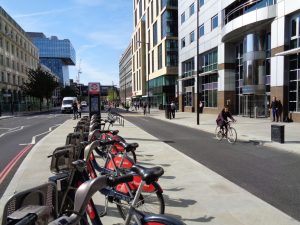 Construction lasted for 14 months and throughout this Lucy developed and maintained the relationships with business owners along the route who she had previously spoken to.  There was a Public Liaison Officer (PLO) on site at all times who was able to filter issues that arose and pass them on to Lucy before they escalated further.  Lucy was known to the local businesses as being responsible for the project and this sometimes resulted in phone calls out of hours and at the weekends but helped build trust and confidence in the project.  There was one example where a restaurant owner called her on a Saturday lunchtime as the contractors had started digging up the footway right outside their restaurant which was full of customers.  Lucy was able to call the PLO and ask her to move the contractors on to another section and to come back at a more convenient time.  These discussions demonstrated that the project was being managed in a way to reduce the inconvenience to local businesses as much as possible.

Since the cycle route opened in May 2016, cycle numbers have gone up by 55% as many more people are choosing to cycle, not only to work but also at the weekends with their families and young children.

Click here for some more photos of Lucy’s presentation

Lucy consolidated her learnings into three key messages which can easily apply in New Zealand: 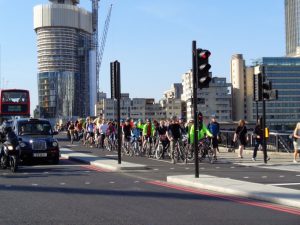