“I’m a public health scientist with the School of Health Sciences at Massey. My research is a wide variety of things, with a focus on interventions that will positively impact unfair differences in health. I mostly work with communities living in poverty and Maori health organisations, and my main focus is access to healthy kai. 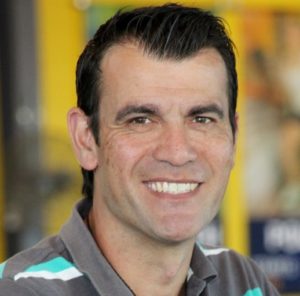 Food has always played a big part in my life but it took me a while to realise how important it was. I’m not sure how I ended up being an academic. I’d never even heard of university when I was young. When I was growing up in Kaikohe my family were quite poor. I didn’t have a pair of shoes until I was 13. We were always in the garden, doing stuff, weeding, planting, harvesting. We’d spend weekends preserving fruit and picking blackberries in the summer so we could preserve them for the winter. I was baking when I was 10 years old.

I dropped out of high school early and had a lot of random jobs before going into the air force. When I left the air force at 23, my boss told me I should get some qualifications. I was pretty good at sport, so I went and did an exercise science course because I thought I could become a trainer. It just really fired up the neurons in my head and I discovered I really loved to learn. I went from one course to the next and the next and I ended up with my PhD. There was no plan at all. I didn’t know where I was going with it, but ended up having Professor Elaine Rush at AUT as my PhD supervisor. She introduced me to Project Energize, a school-based nutrition and physical activity programme, for my doctorate, and through that I discovered I really loved working with kids rather than being in the lab. From there I moved into working with teenagers around sleep and adolescence, then into cardiac rehab.

What really got me going in food was visiting Hastings and Ngati Kahungunu. I was trying to establish a research area so I asked them what was the greatest health issue that they faced. They immediately said: access to healthy food. I was dumbfounded, I thought it would be diabetes or heart disease. I thought, ok, I’m going to have to do something about that. Without having a background in nutrition or a formal background in food, I headed off on that tangent. Now I’m working with communities to be able to establish a healthy, reliable food source.

Recently we did a study where we wanted to see what people’s behaviour would be if we gave them free fruit and vegetables. We went to the third most-deprived community in New Zealand and gave them a huge box of fruit and veg every week for three months. What happened was they consumed almost all of it and they’d give some away to their neighbours or kaumatua, because they saw them as being in more need. For me, that showed that people in poverty eat fruit and vegetables, because that was a big thing that we were trying to overcome. Once we overcame the barriers to access, they ate almost all of it. I’m so proud to now have the evidence so I can argue against the naysayers who say ‘poor people don’t want to be healthy; they don’t want to eat well; they just want to smoke and be lazy’. We’ve got the data to say that’s wrong.

There are two things that keep me motivated. The first one is that everyone working in this area is so passionate about helping others. I am too, but without those people around you, you’d get disheartened easily. We argue among ourselves a lot in academia, but it’s the people who help you through. The second thing is that you have so much anger when you see people not benefiting from society. That injustice is a great driver for me.”