Boyd Swinburn is the Professor of Population Nutrition and Global Health at the University of Auckland and Alfred Deakin Professor and Co-Director of the World Health Organisation (WHO) Collaborating Centre for Obesity Prevention at Deakin University in Melbourne. He is also Co-Chair of World Obesity Policy & Prevention section (formerly International Obesity Task Force).

He trained as an endocrinologist and has conducted research in metabolic, clinical and public health aspects of obesity. He has over 350 publications related to obesity and led two Lancet Series on Obesity. He has been an advisor on many government committees, WHO Consultations, and large scientific studies internationally. 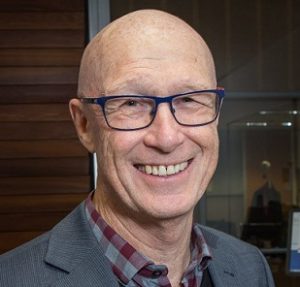 What made you want to get into medicine?

I fell into medicine. I managed to be the last one into medical school before they closed the door. It seemed like a good thing to do and I just scraped in.

Medicine’s just fantastic to be able to open up possibilities for people in a career. There’s just so many things you can do with a medical background. I went down the route of specialist training into endocrinology, especially diabetes, because it’s a real diagnostic and management challenge. There’s so many different facets to it. So many complications, so many different causes. And the metabolic aspects were fascinating. It’s such a fascinating disease in a kind of an intellectual way to study.

What got you into public health?

I went into the research, looking for the drivers and the causes of diabetes by looking inside people. I was in the States at that time and doing research with the Pima Indians. I took a few trips down to the reservation and saw the marginalization of the population and the poverty and the unemployment, and all of the problems that go along with marginalized populations: the obesity, the diabetes, the alcoholism, the mental health, the suicides.

It made me realize that actually the causes of diabetes were not inside the body where I was looking, but they’re outside. They’re in society. So I pulled my head out from inside metabolic pathways and started looking at the wider society to try to understand where diabetes was coming from and what you could do about it.

Yeah, I have. And I’ve worked out about something about myself, which is that I do think in big picture terms and so it’s just suited the way I think, to be able to shift into the big picture spaces. I love the metabolism and I love all of that level of detail as well, but if you want to make a difference you’ve got to shift to the big picture. The trade-off of course is that the big picture is much, much harder and needs much longer timeframes and much broader alliances. But actually that’s where I believe the changes will happen.

What drives you to keep going?

A couple of things. I mean, the reason I got into research is research in itself is very intellectually challenging and stimulating. And I love that discovery part. I love the combination of creativity of thinking about the research question and how you can answer it and the scientific detail and discipline of implementing it. I love that challenge. That’s matched up with trying to try to make an impact and trying to do something in this health space where I am, and particularly social justice. Social injustice drives me crazy.

Things like Judith Collins’ comments about people with obesity, how they just have to lift themselves up by their bootstraps, they’re just lazy and ignorant and stupid. I step out of my impartial scientist’s self and get into my enraged citizen’s self when I hear that kind of thing.  We need to make a difference at a societal level and make a difference to the health equity challenges we face. And no more so than in obesity and diabetes.

Is there anything you wish someone had told you when you started in your career?

it’s interesting; it took me six years of medical training and another seven years of medical and specialty practice and training before I even knew what public health was. Which I think was a real failing in my medical education! But, having said that, no learning and education is wasted. Diet and nutrition – we got zipadee do da on that. And in medicine, you know, 18% of our health burden comes from our poor diet! Even today medical students get very little on that.

Is there any advice you would give someone just starting out in public health?

I really love seeing when [women] take leadership positions and step up into spaces that males tend to do without having the ability. Males will step into a place when they’re still short of the ability and capacity, just because they see that needs happening. Whereas women are a little bit more reticent to step into that until they feel fully confident about it. I really try to support women stepping into leadership roles and being brave and bold in the space and speaking out and taking the initiative, even if we’re not totally certain where that’s going to lead us; to be perhaps a little bit more risk-taking; a little bit more out there too, so that this whole space of public health nutrition gets a bit more profile, gets a stronger voice, gets into a place where it warrants in our health space.

What’s your vision of the future for the health of Aotearoa?

If you look at the stats at the moment, we’re not doing too well on nutrition and health. Our obesity rates are shocking and our diabetes and our diets are just a disaster and the nutritional inequities and the health inequities which flow from that just speak for themselves. So we’re starting from not a good set of statistics.

But we are also starting with a lot of positive attributes. We’re a small country; we’re smart country. We produce a lot of food. We have a lot of excellent science. We’ve got multi-cultural cuisines here. We have an indigenous population that is undergoing a revival. We have the Pacific nations on our doorstep and in our country and all this gives us a platform of vibrancy that if we really capitalize on it, I think we can be a world leader in healthy, sustainable, equitable, prosperous food systems.

Can you tell us more about that?

At the moment, food systems are designed to feed people and make money. That’s the fundamental underlying premise. You know, food goes one way. It doesn’t matter its type, and profit comes back the other way. And those are the systems, those are the feedback loops that sustain the food system and its premise on these underlying values of feeding people and making money.

And with that comes a whole lot of unintended consequences. All the health consequences of obesity and diabetes; all the health inequities and all of the environmental damage. So we need to reimagine food systems that provide better human health, greater social equity, sustainable environments and economic prosperity. So those four outcomes, if we refashion food systems to try to deliver those, not just feeding people and making money, then I think that if we can get that to flow through our food systems, then I think we’ll be world leaders.

Post-COVID is a perfect time. Everybody seems to be talking about the need for healthy, sustainable food systems. So let’s make it a reality in New Zealand. That’s what I want to see now, now’s the time. Right now! We’ve got three years to get this baby kicked off. We really have to. If there’s any time we need to step up, it’s these next three years.

If you were prime minister what would you be doing?

Actually the Prime Minister has actually articulated this in some fashion. She’s got to go a little bit further, but she’s already articulated based on the national prosperity angle that New Zealand can lead the world with sustainable food systems…It’s not formally down in any formal government policy yet, but on the hustings she has talked about that. So I think that’s great stuff.

What they haven’t included is the health and the equity side. And that’s where we need to work hard to get that into that mix.

So if I was prime minister, I would kick off with a major commitment and investment – not just money investment actually, but it’s political capital investment. My guess is that this Labour government is going to come in with a large amount of political capital, just like John Key had for nine years, which he didn’t use.

How can people working in public health support your vision? How can we work together?

I think people working at the coalface are doing their best within the scope that they have. What I’ve been trying to do is to create the platforms, to bring all these voices together into one large collective voice. So they need to get engaged with groups. And we’ve set up the Health Coalition Aotearoa as a platform for this on the health side, and they need to get in whatever groups they can to add the voice from their perspective from their organization, even from their personal perspective.

So make submissions, join the groups you know, put your hand up to participate, make a donation, all of these contribute to a bigger voice to demand policy action.

Lifting the demand to get over this policy inertia is what we need the civil society groups to do.

We’ll also need all these groups, all these people who work at the coalface, not only the health professionals on their lived experience, as they’re trying to deal with this, but also the people themselves, as they’re struggling with their daily lives to try to make ends meet. We need those stories out there to be part of the voice of the public demand for policy action. At the moment the public and all these organizations are generally very supportive of what groups like the Health Coalition are calling for. But it’s a quiet support. It’s not a noisy, demanding, on the minister’s desk kind of voice. So we have to raise that voice.

We have to get it on the minister’s desk; on the prime minister’s desk. It’s gotta be there so that there is this counterbalance as they’re weighing up their political balance. Childhood obesity, for example, has to be raised as a huge thing we have to deal with. And that has to be on the minister’s desk. These last three years, they’ve been able to ignore it. They haven’t done a blind thing because there hasn’t been enough demand, because they know if they go after what WHO says they should be doing; what all the expert groups say, they’re fighting a battle. So they say, ah, I don’t need that today. I’ve got other things to do, you know. We’ve got to create the demand for action.