Posted at 09:46h in Healthy Community by Alison Pask

Phasing out sugary drinks in Pasifika churches and community groups 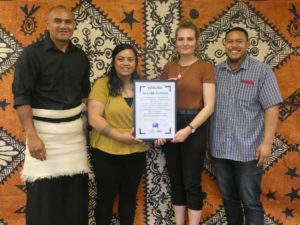 A water-only pledge has been translated into seven Pasifika languages and jointly signed by nearly 20 Pasifika church and community group leaders, shifting the consumption of sugary drinks where community spend their time across Auckland.

“Rather than simply use the water pledge in English, we wanted to connect our Pasifika communities with the water-only kaupapa by creating bespoke, culturally-centred versions.”

The pledges were signed by church and community group leaders during a ceremony at The Fono in Henderson. Church and community group leaders selected a language which most reflected their congregation and will hang the framed pledge within their church. A Church leader says having a culturally appropriate pledge in their native language will help the message to reach the entire congregation.

“Even though some of our congregation drink water at church and home, the pledge will encourage and aid our Enua Ola group members to convey the water as their first choice to the whole congregation, the pledge resonates with us as it reflects our cultural values through our language.”

The pledge will act as a stepping stone for further conversations with the churches and community groups on improving the health and wellbeing of members. Fole continues,

“The signing of the pledge is only the first step. In partnership with the FONO and Enua Ola, we will continue working alongside Pasifika to build thriving communities and make the healthy choice, the easy choice.”

The initiative has been brought to life through a partnership between Healthy Families Waitākere and The Fono, collaborating to get to the heart of health and wellbeing issues faced by West Auckland Pasifika communities and identify what can be collectively actioned to enhance community wellbeing.